In our search for rest and shade after a busy week, we didn’t have to travel far. A pontoon at Champs-sur-Yonne a few kilometres upstream was just the job. However, it also proved popular with the local youths who descended on us in the afternoon – it being a Wednesday. They were ok, just a bit noisy and when they finally departed, left a big pile of rubbish. 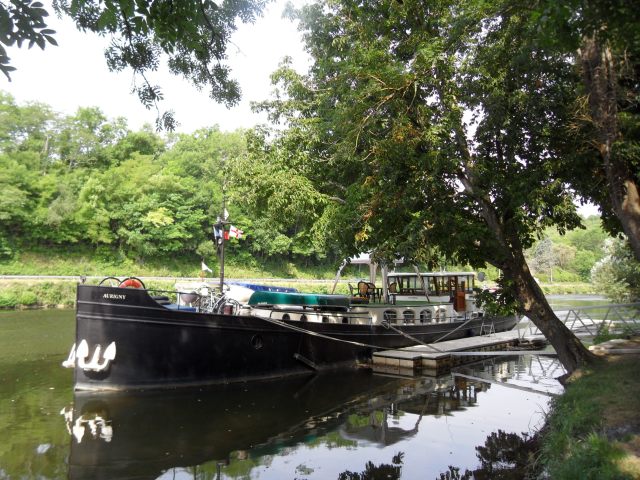 We stayed one more day and made use of the jetons for electricity and water that we had bought while shopping in the small town. In slightly cooler temperatures, we paddled our canoe up the weir stream where Peter was pleased to see lots of barbel.  With the sun out once again and temperatures rising, the youths returned mid afternoon and so we decided to leave. 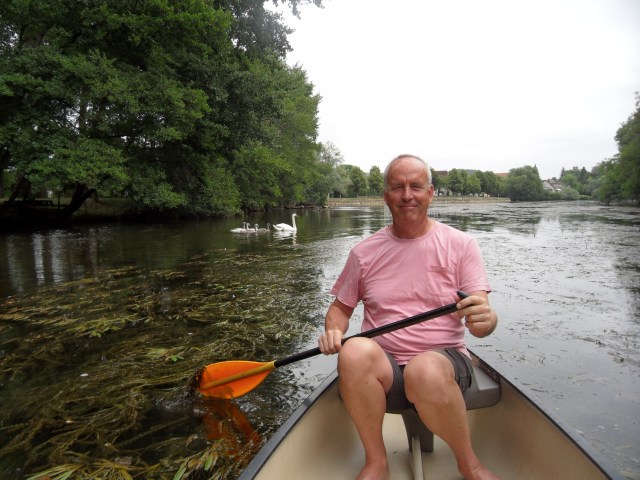 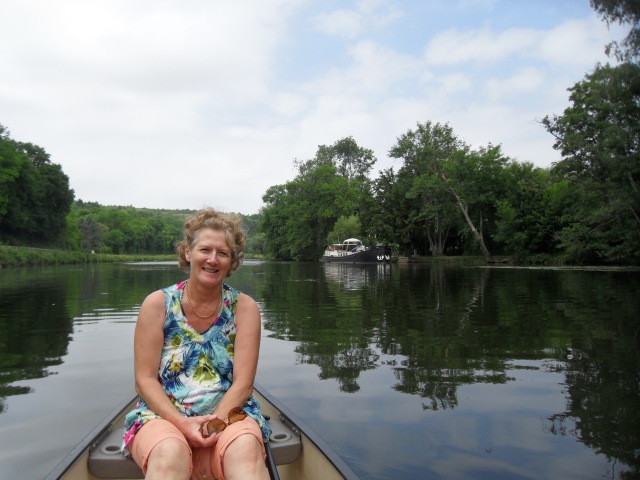 Next stop was Bailly, adjacent to the wine caves we had visited seven years before during our first month’s cruising. Once again we were surprised at how empty the river and canal were. I walked along to the chapel which housed a small exhibition by local Irancy artist Georges Hosotte. I also walked up the Col de Cremant which afforded great views across the vineyards as the sun set.

Soon to be Cremant in the caves below. 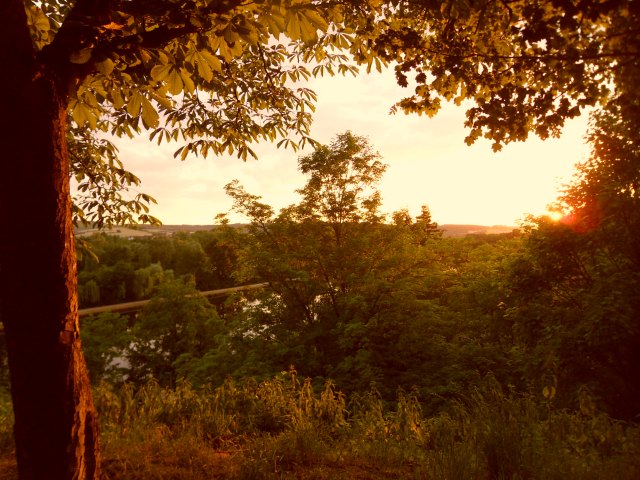 Nicci’s view of the sunset…

…and mine over a fishing rod!

After a couple of days we moved along to Cravant, another mooring we had previously used. A walk into the town revealed a couple of wash houses (Lavoirs) previously unseen and the site of a big battle in the fifteenth century. 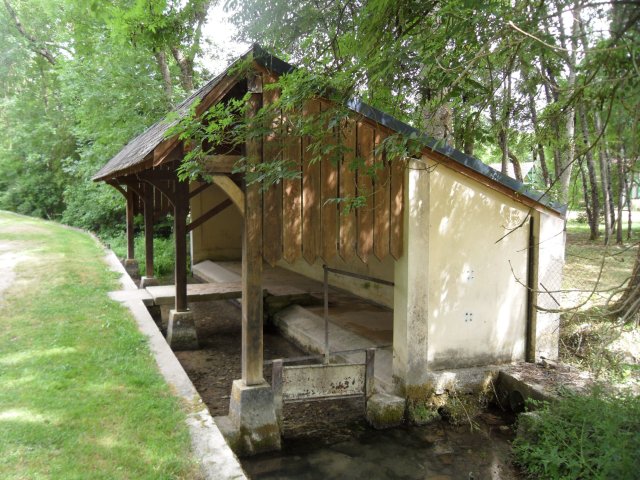 At this point we hadn’t any plans to ‘do’ the Canal du Nivernais again, but with plenty of time on our hands, moved on to the grandly named Mailly-la-Ville, stopping at the cafe in Dames Ecluse for lunch, having arrived there at just the right time to leave Aurigny moored in the lock. 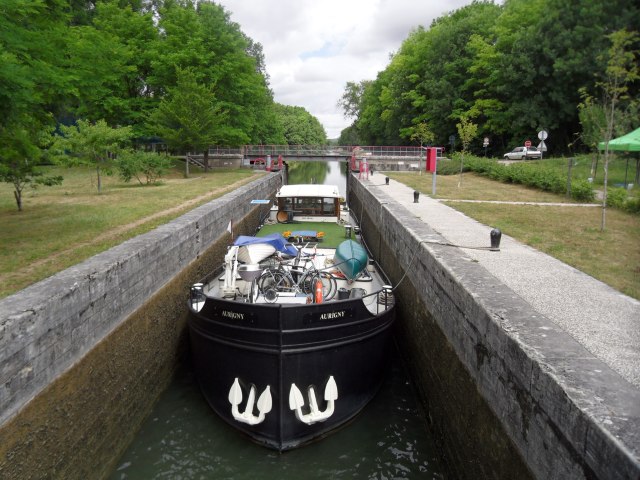 Perfect timing, we and the lock keepers go to lunch !

The weather finally broke and we had several days of heavy rain which oddly enough came as something of a relief. We spent several days at Mailly and were joined by keen fisherman Ritchie who we had met during the winter months at Bruges where he did some work on ‘Matariki’. Sadly even Ritchie was unable to catch anything from our front deck despite several hours up there with Peter.

Once the rain stopped, I walked around the uninspiring ‘Vide Grenier’ on Bastille Day in the ‘town’ more of a village really – which has just the minimum of shops. I walked along the canal to Mailly-le-Chateau with its small chapel to St Nicholas and pretty river section (Yonne). A climb uphill to the ‘Haut Ville’ and chateau gave more views spoiled only by the lack of sunshine and the weirdest War Memorial I have ever seen.

Maybe they had a ‘manneken pis’ statue they didn’t know what to do with ?

As the weather cleared I cycled to the Saussois Rocks and third time lucky, (having missed the tiny signpost) made it up to the top of the rocks with splendid views over the Canal du Nivernais.

With Madame from an adjacent house asking how long we were staying, and hinting that the pontoons were not really for barges, lovely though ours was. We decided to leave after visiting the Grottes d’Arcy sur Cure.

These prehistoric caves predate even those at Lascaux, but sadly during the 1970s an entrepreneur wishing to use the copious quantities bat guano had the caves pressure washed with chemicals. The workers wondered at the red dye that appeared in the water and fortunately the washing was stopped. However it had destroyed the majority of the cave paintings within.

The caves were very cool (12C) and our guide very informative. There were lots of cavey things to see like stalactites and stalagmites as well as the few remaining cave paintings. Afterwards, back in the heat of the day we strolled along the River Cure and explored some of the caves on the surfaces which were evidently still producing objects of interest as an archaeological dig was in progress.

In need of refreshment and cash, Janet the sat nav informed us that the nearest ATM was in Vermenton and so we drove there. We had cycled there from Cravant seven years before and decided to visit the same bar. We were joined by an amiable character- ‘Irish Tom’ who was celebrating his birthday. Several beers later we decided it was prudent to leave as we had to drive back this time.

Having enjoyed dipping a metaphorical toe back in the ‘Nivernais’, we turned the barge around and headed north. Annoyingly we had to wait over forty minutes at Sery Lock as no lock keeper was in sight and none of our available telephone numbers worked. In true ‘bus’ fashion eventually three VNF vans arrived with five lock keepers who were all ‘desole’. One of them said that they didn’t know we had left the mooring because we hadn’t told the lock keeper…in the lock going the other way! However the hire boat coming towards us in the lock had already been through one lock- so they must have known it was underway.

A longish and very hot cruise took us to Vincelles where we managed to slot onto the end of the quay thanks to Paul and Deborah on ‘Peary’ moving back to make room. After I’d had a refreshing swim in the river we were invited to join them for a barbecue. Amazingly, Paul’s sister and brother-in-law (who live in Suffolk) know Peter’s brother Paul and nephew Richard – small world!

The quay at Vincelles looked rather the worse for wear since we had stopped there before, but at least the adjacent crepe/galette cafe was open and we were able to pay for electricity and water when we needed it…which we did for the TV… Wimbledon was on and with the exhausting heat we didn’t feel like doing too much else.

We enjoyed some time with Bill and Claudia (‘Amorak’) who had also been at the DBA Rally and made good use of the adjacent creperie. Inevitably, I had several walks into the surrounding countryside and also cycled back to Mailly to get the car. We used this to drive over to Montargis to see Stew and Marnix on board ‘Carpe Diem’ before they cruised too far away on their trip to Spain.

Our R’n R was over and we now looked forward to a month or so of entertaining as we slowly cruised north on the River Yonne.

This entry was posted in Uncategorized. Bookmark the permalink.