After eventually negotiating our way onto the River Amstel, having been told to inch up to a couple of bridges to see if we could get underneath them by a bridge watcher who commented “this is Amsterdam…we can’t just keep opening bridges you know”; we enjoyed our cruise through the city. In fact, by contrast the rest of the bridges opened as if by magic on our approach.

Cleared the first one by a few inches, the rest had to be raised. 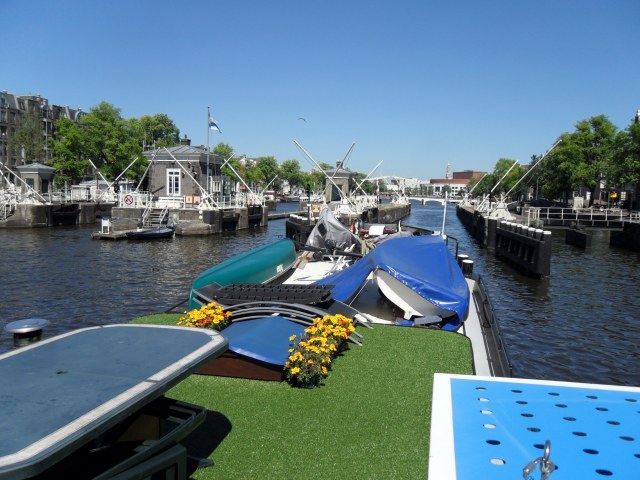 Through the Amstelsluis towards the city centre.

The first of many but worth it for an interesting passage through Amsterdam.

Not a straight route through, plenty to keep me occupied. 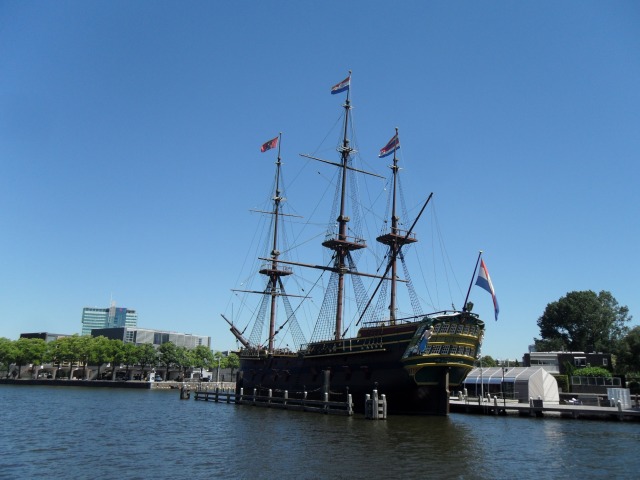 Eventually we make it through to the Maritime Museum near the railway station.

Out past the Maritime Museum and onto the busy River IJ before turning right onto the River Zaan and overnight stops at Zaandam and Wormerveer. With Paul on board we were able to recce ahead for suitable mooring places and chose Woudehaven as our next stop.

Out onto the River Ij. A large and very busy waterway.

A chance to give the engine a bit of a blast.

The River Zaan and more bridges. 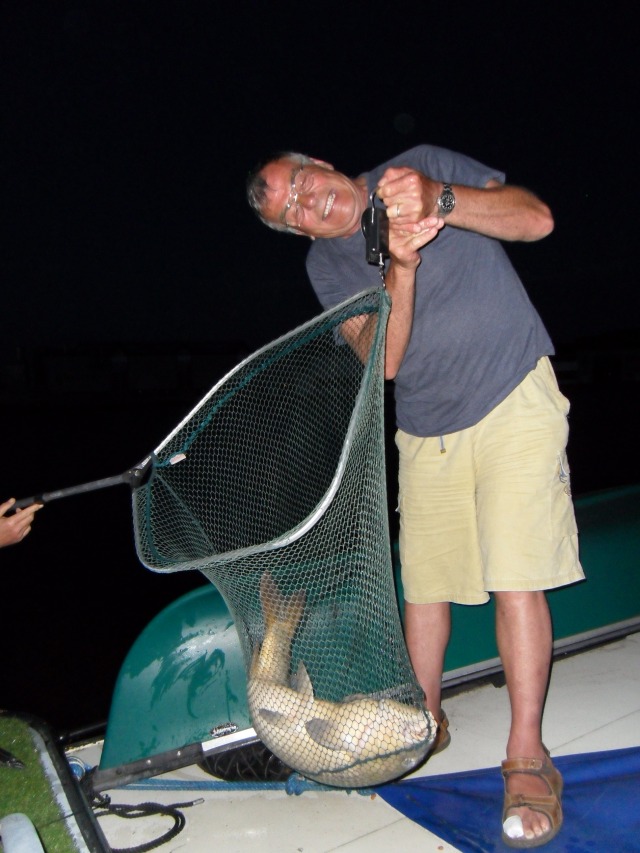 A lovely 20lb carp for Paul at Zaandam. 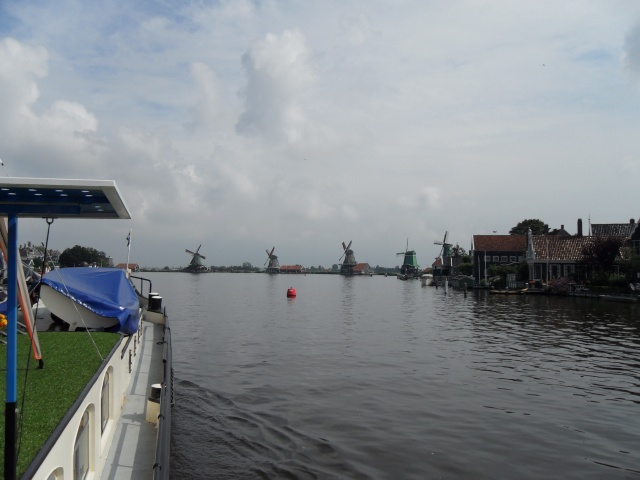 Passing Zans Schans with it’s pretty houses and windmills. Set up as a living Museum.

The busy schedule continues at Wormerveer !

It looked very empty and peaceful when we left a car there, but a spell of hot weather soon brought people out on the water and we were pleased to get a good spot on a pontoon for a couple of days at the weekend. With no access to the bank, we used our canoe once again and even gave the dinghy a whirl in the adjacent Alkmaardemeer. 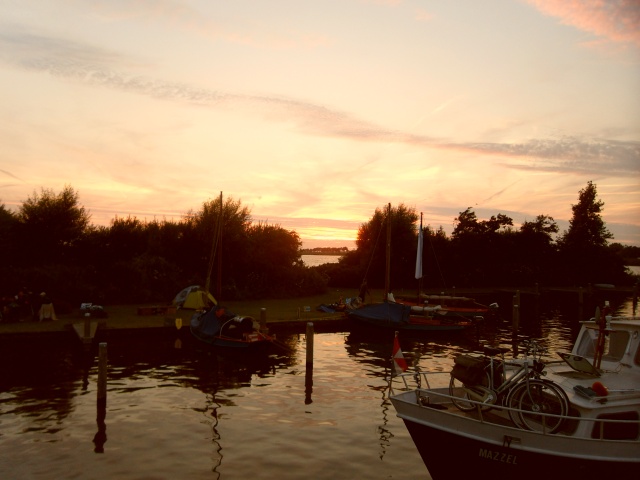 Woudehaven. A popular spot with its huge lake in the background.

Our next stop was on a free three day mooring by a windmill at St Pancras. Paul left us from there and I walked into Alkmaar, which was rather further than I’d anticipated. While there I hopped on a boat trip which went around the canals and under some very low bridges.

St. Pancras. No shortage of sunsets when the country is so flat.

With Jo and Tim (‘Maria of Zaandam’) not far away, we all cycled in to Alkmaar and met at the weekly Cheese Market, enjoying a few hours and several beers together. 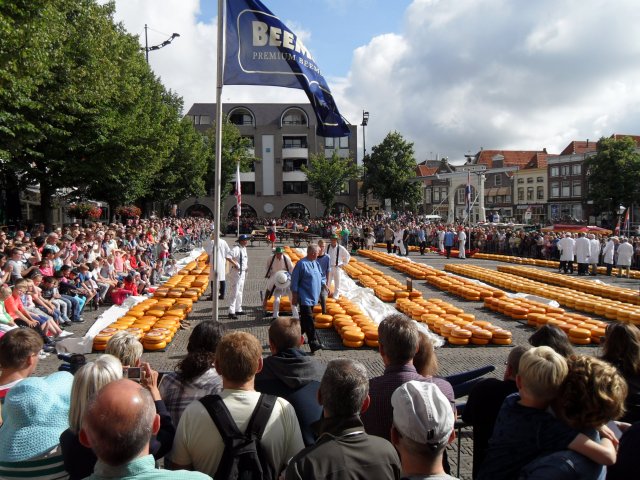 More of a tourist spectacle nowadays. 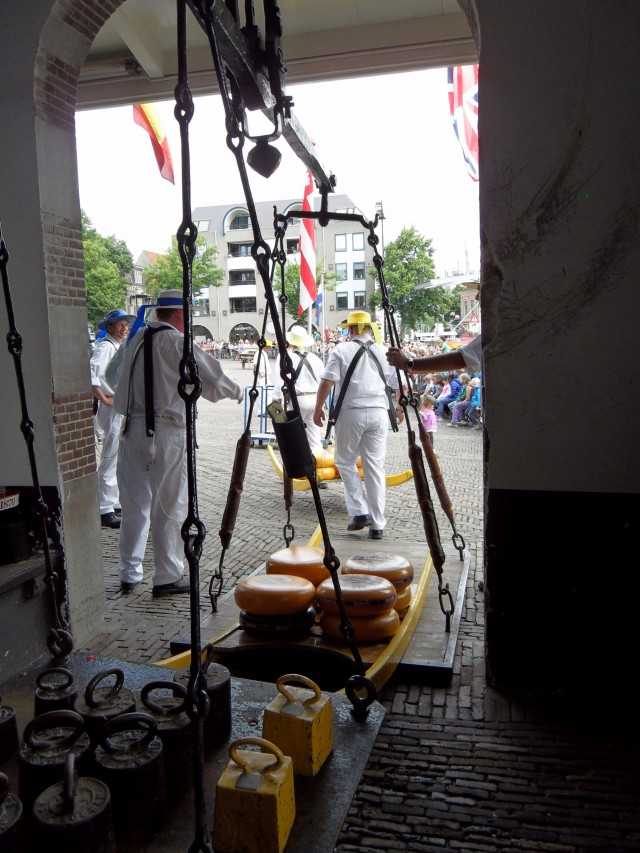 Still worth a visit.

Having overstayed at St Pancras, we decided to head further north and after an unexpected delay when our alternator belt broke, we made it to a quay in Winkel. The free 3 day pontoon spaces were full of small boats, however the quay suited us better.

We stayed a week in Winkel while the weather refused to settle into anything like summer. During this time I painted the small corridor between the galley and utility room when the weather was bad. In finer weather we cycled to find the interesting Irish Cottage Pub in Oude Niedorp.

Well worth the cycle to Oude Niedorp… 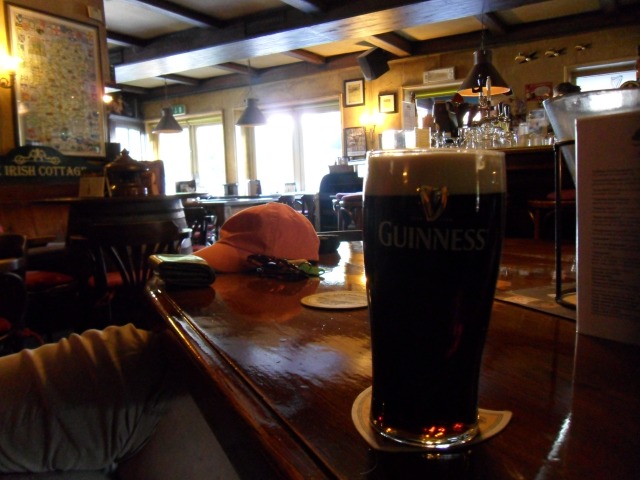 …As you can plainly see!

Louise (‘Riccall’) had told us about the weekly market and dressing up parade by townsfolk in Schagen so we caught a bus over there and arrived in time to see the spectacle. Unfortunately, rain stopped the post parade show, but that may have been a blessing in disguise as it was composed of young children singing and dancing… so we sheltered in a bar enjoying coffee and apple cake as the MC eventually gave up and took cover.

Many of the locals go to a lot of trouble to parade themselves in authentic dress. 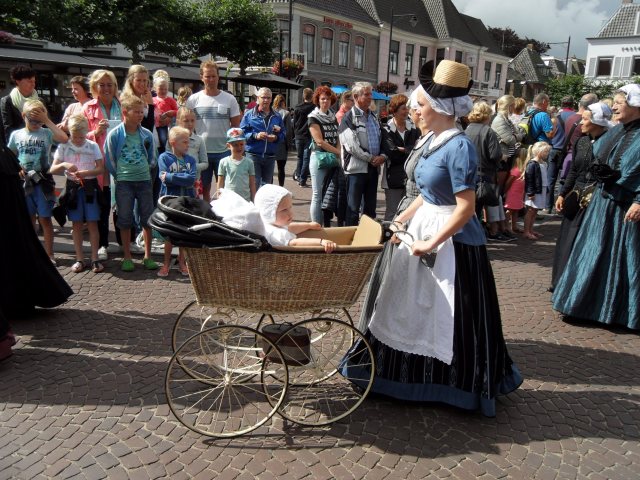 A walking museum and quite a spectacle.

The town and the market were buzzing with tourists.

And then ‘rain stopped play’.

A train to collect the car from Heerhugoward and then a meal at the Irish Cottage Pub ended a lovely day.

I took advantage of the car to drive over to the Zuiderzee Museum at Enkhuizen. There I enjoyed a ferry trip to both the Indoor and Outdoor Museums which told of the storms and floods of 1916 which prompted the eventual construction of the Afsluidijk and creation of the Ijsselmeer.

The outdoor museum boasts 130 buildings many of which were dismantled from their original villages and rebuilt at the museum. Numerous craftsmen were demonstrating their work. Part of the indoor museum was devoted to wonderful old wooden boats. 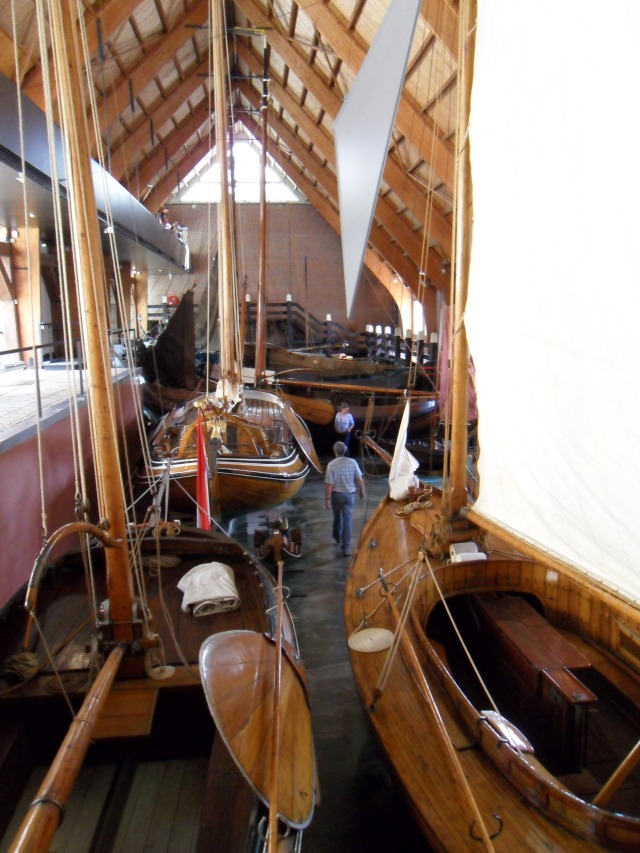 The days before steel.

And what if the dams fail?

Having decided to continue north we had a short trip to a detached 3 day mooring just north of Kolhorn which we shared with a Dutch cruiser. Unfortunately, although it remained dry, the wind increased considerably and further travel would have been difficult. Even the fish weren’t playing. So on the third evening at around 8.30pm, Peter said “Do you fancy a cruise?”…and off we went to the surprise of our Dutch neighbours.

Alas, our romantic evening cruise ground to a halt a few kilometres further on when we came to a closed lift bridge and had to cobble together a mooring for the night on its widely spaced dolphins.

Jo and Tim had reached Pishoek the previous week and had turned south again at Den Helder but we still hadn’t decided on our final direction after the Amstelmeer. Initially we went through a lock onto the canal which led to Middenmeer, but after a couple of kilometres it was getting quite shallow and narrow. Fortunately, we decided to turn around in a wide part and were soon heading back up into the lock where the lock keeper didn’t seem that surprised to see us!!

The wind was bracing as we crossed Amstelmeer and onto the Balgzandkanaal.                 Then we headed south on the Noordhollandsch  Kanaal having decided to miss out on the delights of Den Helder. We eventually stopped on a 3 day mooring at t’Zand

A huge 4 master motors past us at t’Zand. 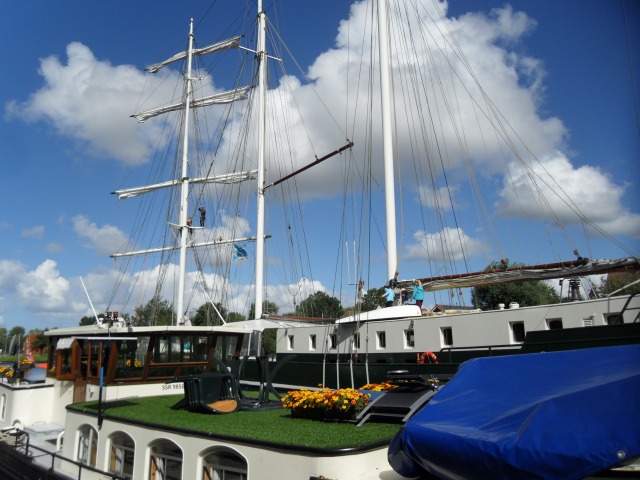 The people on the forward mast put it in perspective.

We spent five days there during which we had a bracing cycle to the coast at Callantsoog and I eventually managed to retrieve the car from Winkel. This took two attempts as the first one was rained off and the second involved cycling to Schagen where I left the bike, a bus ride to Winkel to get the car and a return via Schagen to collect the bike. This once again made me wonder at the point of having the car with us in the summer.

Callantsoog beach, about level with Norwich. 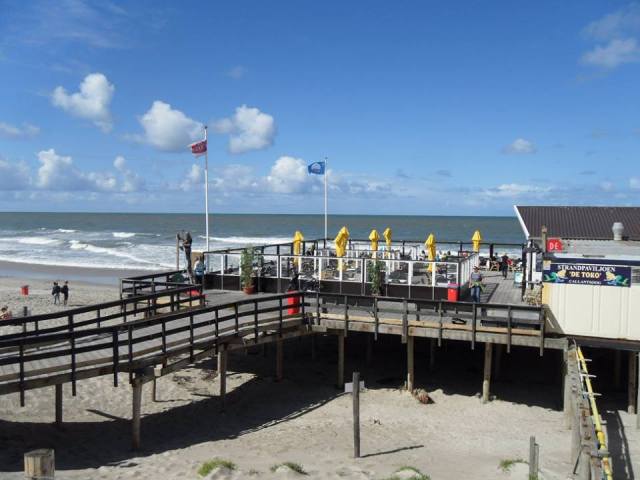 Luckily there is an oasis amongst the sands !

Very drying this salty breeze after a long cycle !

The countryside is mainly agricultural and there are a few windmills and lots of wind turbines to break up the monotony of the flat landscape.

With our daughter Laura and my sister Kate arriving mid August, we proceeded south through Alkmaar and back to Woudehaven where Jo and Tim were moored and we enjoyed their company and topped up our water supply. 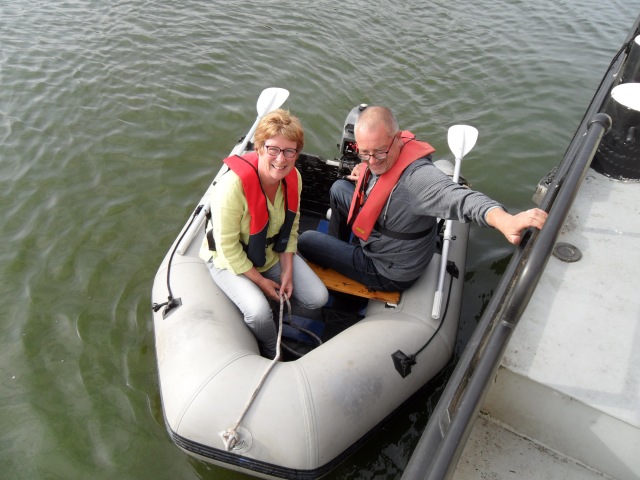 Jo and Tim stop by in Woudhaven to check we are off to the local bar!

An unfortunate side effect of too much crop feeding is this annual bloom of algae.

Jo and Tim head off back to Wormerveer ahead of us.

Our next stop was Wormerveer, from where I headed north to collect the car and where the girls joined us after spending a night in Amsterdam.

Aperos in Wormerveer prior to Kate and Laura arriving.

Laura sporting her Gryffindor scarf knitted as a surprise for her by Nicci. 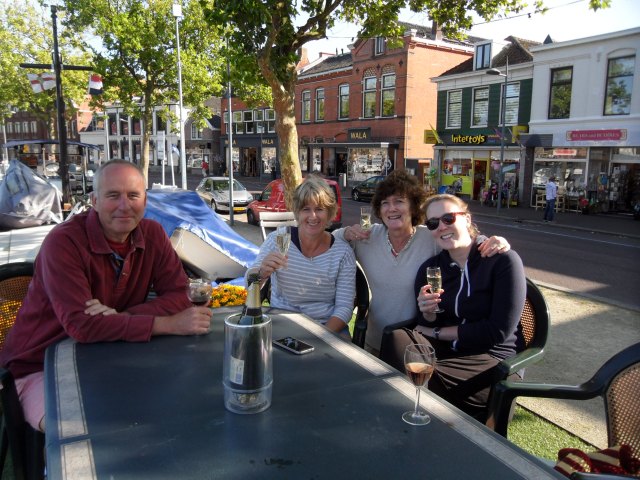 Jo joined us for a girls outing to nearby Zans Schans where we explored the interesting living museum including its original Albert Heijn Grocers and various windmills. I bought some mill ground mustard as a ‘Peter permitted’ souvenir. 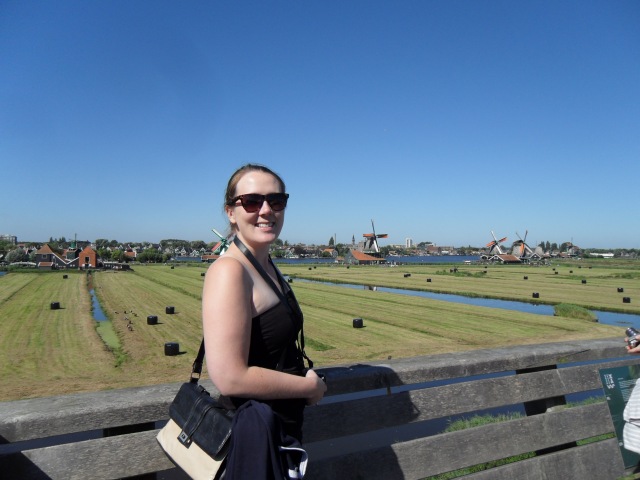 Girls will be girls!

Yes…you could ski in those!

Our family had brought fine weather with them and we enjoyed a long but sunny cruise the next day down the Zaan and onto the Noordzeekanaal past Amsterdam to the busy Oranjesluizen. Then out onto the IJmeer where a strong broadside wind made for a bumpy ride until we reached the relative calm of Muiden and the River Vecht. This was buzzing with all sorts of vessels, but the Tjalks near the lock were particularly attractive and the friendly lock keeper ensured we passed through easily. A long and fairly empty detached 3 day pontoon was a welcome sight late afternoon and we enjoyed a barbecue on deck. 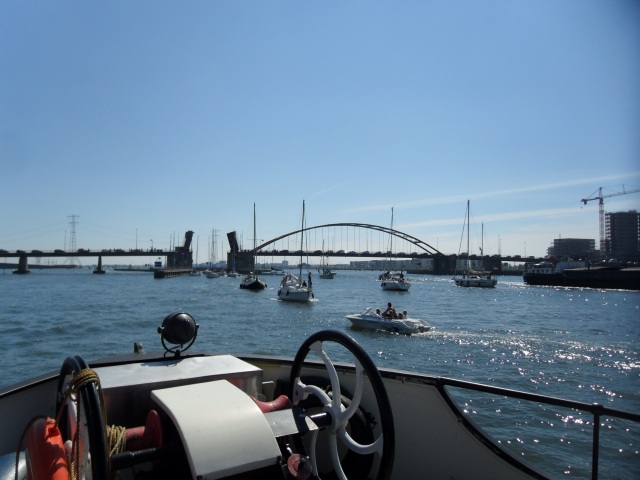 Heading out into the IJmeer. 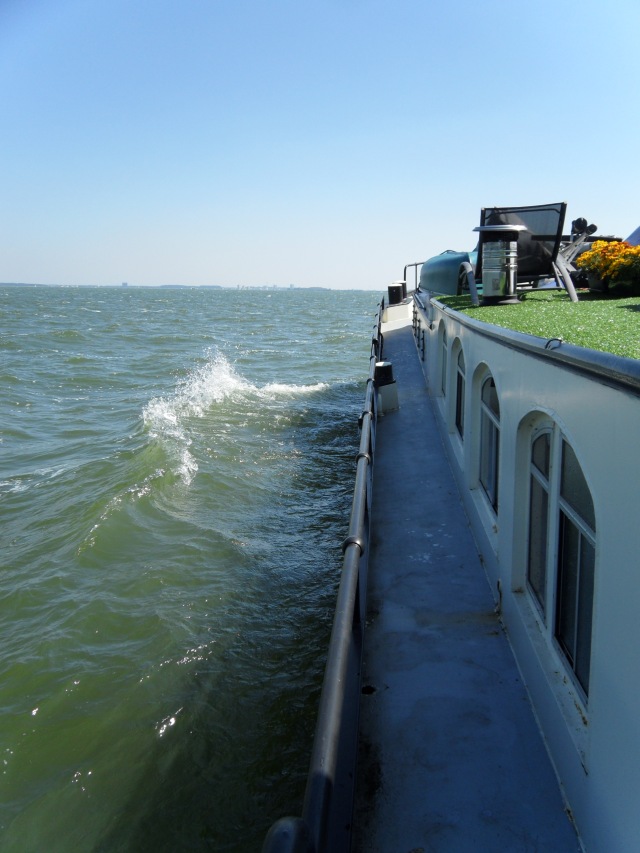 Quite choppy and broadside on. 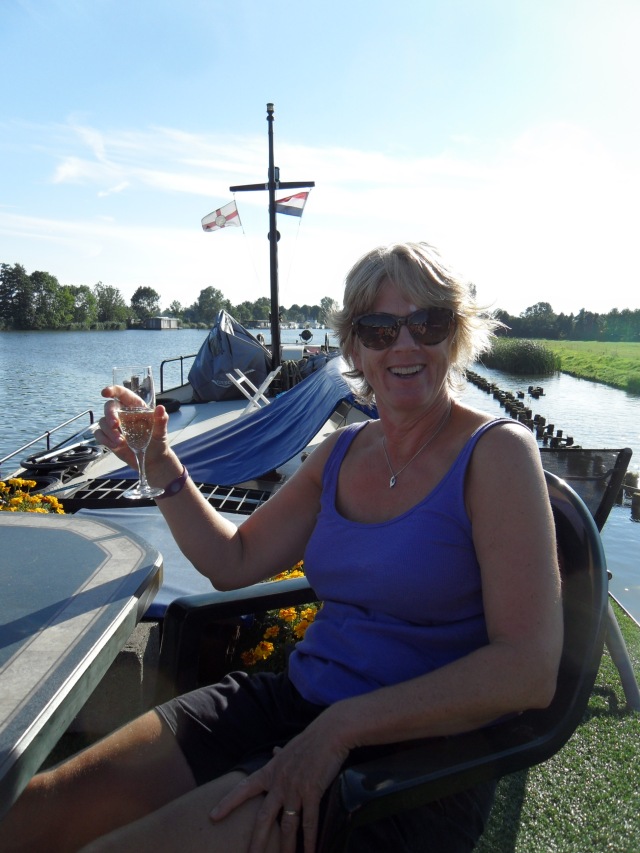 First stop after The Ijmeer and time to chill.

Laura, happy to be spending time with Mum and Dad before her big adventure starts in New Zealand. https://flipflopsandflightsocks.com/

Just a small trip through Weesp the next day took us to another detached 3 day pontoon where we dropped the canoe into the river and Laura, Kate and I paddled somewhat precariously across to the bank and walked back into the town. It was a charming town with lots of independent shops as well as a well disguised Albert Heijn where we were able to buy some groceries.

After a walk back and second precarious paddle to the barge, we relaxed for the rest of the day and enjoyed watching the British Women’s Hockey Team win Gold in the Olympic Games.

The Vecht is a pretty river and reminded us of the Upper Thames in places. Our next overnight stop was in Maarssen where we moored on the opposite bank hoping for a free mooring this time. Alas no.

The weather had been fantastic for several days but it chose to rain hard on Sunday 21st August as we left the River Vecht and headed out onto the Amsterdam Rijnkanaal. We were hoping to moor on the Merwedkanaal near Nieuwegein, but the lock keeper warned us that a Dragon Boat Regatta was taking place beyond the lock and the mooring spaces limited. So we phoned Dick the Haven Master at Vreeswijk where we had moored in early July and were relieved there was space. So we headed into the port and were soon moored up and topping up our batteries. Kate would leave us the next day and she and I caught a bus into Utrecht for a look around before she headed to Schiphol airport and I to Wormerveer to pick up the car.

That evening Laura, Peter and I enjoyed a walk followed by a Chinese meal in the old port.

A walk and a beer in the lovely town of Vreeswijk.

The next day we would cruise to the Hollandsche Ijssel. Laura made a video with her new camera starting back when we were on the Zaan which she edited and added music to.

This entry was posted in Uncategorized. Bookmark the permalink.